The Seed and Potentiality

The delights of growing up
Seeds have always been fascinating for me, right from my earliest memories of adventuring around my Grandparents farm in Zimbabwe. My Gran had a Lucky Bean Tree at the bottom of her garden which was a source for treasures of little red and black seeds; the pods were long and lumpy resembling spaceship-like rooms. The pods of the Msasa Trees which grew all over the farm crunched under you feet as you walked giving one a delighted satisfaction; their seeds were smooth and interesting to suck on and turn over with your tongue.

Gateways to our imagination
Seeds, pods, flowers and fruit were gateways to our imagination growing up. They became boats, helicopters, fairy wings, tools, treasures to trade, momentums of love and at times weapons of war. There were some seeds that stung when thrown at you; burned if you rubbed them hard; stabbed and itched. And then all around us we were continuously aware of the rhythm of the growth of the plants and grains that were the source of income; food for the cows; or the hidden delights of Gran's vegetable garden that got raided regularly!

A new studio
Decades later, living in the city of Cape Town, I was sitting on the floor of my empty, new, studio in Woodstock wondering what I should make happen there. I questioned myself on who, as an artist, I should decide to become and how, on earth, I was going to create a space that was financially abundant and nurtured all the intrigues and passions of my heart. I started to grow plants. Surrounded by cement, bricks and mortar I started nurture the plants around me investigating and making a variety of containers to protect them from the wild heat and wind of Woodstock in December. Looking back now I realise that it was really my 'self' as an artist I was nurturing. I was allowing myself the opportunity to grow into the future I was embarking on. I was giving myself permission to be outrageously and publicly awkward in my process as I slowly stumbled on who I would become.

Sow and Harvest
This early process lead to an exhibition called Harvest in January 2013. There are concepts that were born here that have become an important part of who I am now. Some of these concepts are - the potentiality of the seed; radicle/radical; one hundred; the banquet; the philosophy of process and inevitable abundance that comes from following ones intrigue and intuition.

I started drawing and selling seed to friends. I sent out an email with the heading Sow a Seed | Nix has Arrived! This was in 2013, and when one sows a seed the first thing that happens is a nauseating nothing and then very, very slowly the radicle begins to grow eventually to break through the hard casing of the seed. The following three years were that. Already, back then, I knew I wanted to create giant seed sculptures, but I lacked capacity.

The Giant Baobab Seed
At the first opportunity I had in 2017 I decided to make I giant baobab seed to match the giant tree, Yggdrasil - The Tree of Life, we were building for Afrikaburn, South Africa. It was a conceptual conversation that was essential between the seed and the tree; the people and their dreams. This seed was the silent garenttee of all of our potential both individually and collectively.
The Giant Baobab Seed was exhibited at Youngblood Gallery in February 2017. It then travelled to and lived in the Tankwa Desert for two months while the tree was built reminding us to imagine beyond what currently seems possible. When the Tree was finished the seed took it place in the center.
Art has the ability to move and shift perspectives within us. The physicality of the giant baobab seed in the heart of the tree resonated a peaceful, sacredness to the space. It pulled people towards it inviting them to interact with it touching, leaning and talking over it.
This Baobab Seed has found its home at Moonsmill in the South of England. This particular seed was created through a collaboration between Nix and shapesmith George Hay.

Now
I am currently working on series of giant size seed sculptures. I am investigating concepts aligned with the seed such as;
Radicle and radical - Radicle is the primary root that is the first part of the seedling that emerges in the process of germination.
The process of nurturing - What does it take to bring to life the smallest desires within ourselves that could become our greatest living dreams.
Time - The human's relation to time is minuscule and powerful put alongside the lives of trees. I playing with concepts of presence and eternity.
Growing despite the circumstances - I find humour in the plant that grows out of the brick six stories up a building. Growth in unexpected places.
Potentiality and potential energy - The energy of a body or a system with respect to the position of the body or the arrangement in the system. 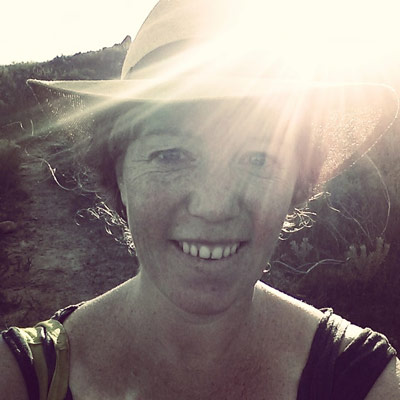 "Through the mystery of navigating the unknown we are able to wondrously unravel our hearts to expose their true nature.“

Nix Davies is a collaborative, conceptual artist that explores possibilities that arise from consciously stepping into and existing in the unknown. She creates and produces large-scale experiential spaces, events and artworks that ordinarily are impossible to create alone. Nix initiates, instigates and ignites concepts by establishing a platform that require others to step up, risk, interact and belong to the process alongside her. This requires Nix to co-create; manage individuals and groups; and produce an over all piece of work by consciously making or facilitating a series of choices of best possible solutions for specific moments.

Nix often embarks on ‘life installations’ that showcase the emerging and developing of concepts along an ordinarily unknown journey. It is while living and navigating these spaces that she breathes ideas to life.